Well, this is starting to get annoying.  Last week I remarked that it almost looked as though broker Chris Fountain was the only one still selling high-end real estate around here and, by gum, he’s gone and done it again!

487 North Street is his latest triumph.  This was a magnificent, 14+ acre estate (directly across from the beginning of Dingletown Road, if that helps) which unfortunately entered the market back in April, 2008 at the, um, magnificent price of $23,500,000. It’s a truly grand, brick Georgian colonial, as seen below.  Seemingly called “Whispering Winds”, although, thanks to its siting, mere feet from busy North Street, perhaps “Whistling Cars” might have been more accurate.

But seriously, I loved this place, absolutely loved it, and it pains me to imagine it being torn down, yet that’s probably its fate.  Anyway, broker Fountain didn’t actually sell the building, he sold a separate piece, containing 4.9 acres. Here’s the part Chris unloaded for $4.750M:

The sale is mysteriously credited to Chris’s partner at EBT Realty, Frank Farricker, but the fact is, Chris did this deal back in, when was it, October, 2011?  That’s a &%#@-ing long time to close, but hey, at least it closed! 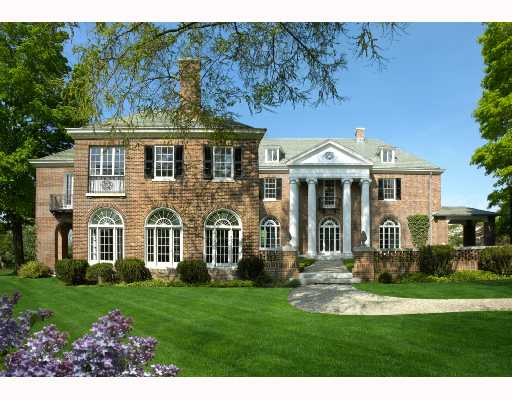