9 Miltiades Avenue closed at $3,187,500. Pronounced mil-TIE-ah-dees, the street is named after the Athenian general who defeated the Persians in the Battle of Marathon, 490 BC, but you knew that! 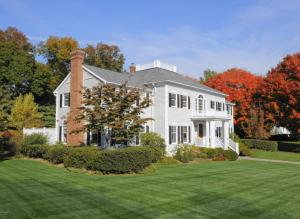 10 Cobb Island Drive closes at $3,300,000. Technically speaking, this place is separated from Route 95 by a smidge of land owned by neighboring Putnam Indian Field School (which is a damn fine nursery school!) but let’s not be picky about this.

The record price for a category of Greenwich real estate called “backing up to the train tracks or route 95”, has jumped again.

And before you say “What were these people thinking!”, I must tell you these are two really, really nice houses. A few streets away you can spend the same amount and get far less house for your money, so it all comes down to what’s important. And I have long observed that, despite all that “location, location, location” stuff, ultimately, most buyers buy the house, not the location.

MLS Link to the above properties