Cos Cobber:
Nope, here in Maine, but I will figure out how to post recent accepted-offers using this damned I-Pad.

Jeff Jackson: Appraiser? Broker? Both! (Now I ask you, who wouldn’t trust that face?)

Most of us brokers know ol’ Jeff Jackson as the friendly, aw-shucks, Mercedes convertible-driving guy from Club Road who co-founded appraisal firm Mitchell Maxwell & Jackson, Inc.  Our clients often hire Mr. Jackson to appraise their properties for various purposes.  But Jackson also acts as a real estate agent sometimes, as he did when he sold my listing at 8 Long View Avenue.

This can make some brokers nervous; what if my clients use Jeff for an appraisal and then he steals them away to get their listing! Doesn’t happen.  I have seen Jeff on multiple occasions maintain the “Chinese Wall” between his two professions.  He’s one of those rare types who knows secret, soon-to-be-released information yet doesn’t blab.  Very, very rare in this business.

So, if he shows up at your listing wearing his broker hat, customer in hand, he’s probably got a live one, ready to buy.  If he’s got the appraiser’s hat on (looks a bit like a fez), he will appraise your future listing, and never breath a word of it to anyone.

Speaking of movies, here’s one of my latest efforts, a funny little murder mystery called

“The Reluctant Detective“, directed by Christopher Lombardi, and reminiscent of the great William Powell/Myrna Loy “Thin Man” series from the 1930’s.

You would think, wouldn’t yew, that having not one, but two movie star grandparents, I would possess some degree of acting talent. Sadly, it seems I was born for real estate!

(Click on the link for a YouTube clip of the movie; my character shows up around minute 2:48 of this 8 1/2 minute clip) 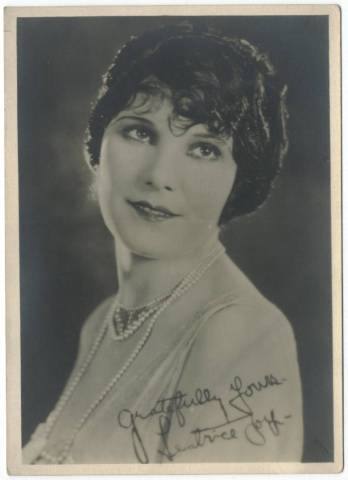 Reader Joan Wolcott has reminded me that my grandmother, besides being a major motion picture star, also taught Sunday school, and, in addition, was a wacky, fun-loving kook that I was glad to be related to.

She was born in 1893, so I really didn’t get to know her till she was practically 70 years old.   As a person of the 19th century, she had the quaint notion that all of us Fountain boys should behave as “little gentleman” and was forever correcting our behavior, which you can imagine did not go over well.

Nowadays, I regret not playing along with her wishes a bit more, I mean, how hard would it have been to stand up when she entered the room, for instance?  I was a spoiled brat and that’s too bad.  She was a great lady.

closed for $3,360,000.  Selling broker Jeff Jackson did a damn good job (I’ll write about him in my next post).  There were a few other bidders, but broker Jackson got the deal done for his couple.

This sale on Long View Avenue (located off Riverside Avenue, between Gilliam Lane and Armstrong Lane, near Saint Paul’s Church) is among

On the other hand, in that same price-range, there are a big bunch of Riverside properties sitting around :

Some of those non-sales might very well have deals “cooking”, but are, for the moment, un-reported.  Still, it does look like Riverside’s caught up with the rest of the town in terms of swollen inventory.

35 Club Road:  About to sell? Rumor has it, this rare Doron Sabag/Dynar Wadia collaboration has a deal in the $8M’s and will, like the last time, be sold “off market” (but with brokers on both sides).

My Club Road sources insist this place not only has a deal, but is about to close.  For how much?  I’m hearing $8M+.  The sharpest among  you will immediately recall it fetched $8.675M back in September, 2008.  This happens to be the property all of us experts liked to point to and say “Ah, there was the good old days, we’ll never see prices like that again.”

As usual, “the market”, you know, those actual humans with checkbooks who buy stuff to live in and actually, truly, determine what something is worth?, the market refuses to listen to experts.

I’ve harped on this before, and I shall do so again…it is impossible to name a precise percentage amount that the Greenwich market has declined since its high-point back in…hmmm…well, when was the high-point?  Fall 2008, let’s go with that.  Certain sections of town “appear” to be down significantly, yet we have so many glaring exceptions:

Here are 8 recent examples of properties that recently sold for “too much”, or so some experts would have us believe.

Gee, this is a shocker:  Olympic medal winners will owe LOADS of taxes on their winnings,.  Gold medalists, for example, will be socked for $8,986, the result of taxes “owed” on both the honorarium they receive ($25,000) and the value of the &%#@ing gold medal ($650). Isn’t that disgusting?

The Internal Revenue Service, thanks to members of congress intent on making the rich “pay their fair share”, has been, for years, charged with going after all income earned by US citizens, no matter where it is earned. And naturally, New York’s Senator Chuck Schumer and cohorts have recently made sure the IRS stepped up enforcement of this century old tax provision.

According to Americans For Tax Reform, the United States of America is “virually the only developed nation that taxes ‘worldwide’ income earned overseas by its taxpayers.” The other country is some place called “Eritrea”, just north of Ethiopia (Yes, this will be on the test).

Florida’s Senator Mark Rubio has introduced a bill to eliminate the tax on Olympic medals. Ain’t gonna happen, not this year, anyway.

Y’ever notice? No matter how much Uncle Sam gets, it’s never enough!

Error: Twitter did not respond. Please wait a few minutes and refresh this page.